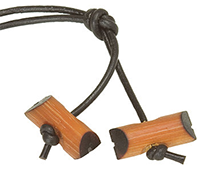 At the completion of Wood Badge completing your tickets you will be presented with your Wood Badge beads. These are two beads on the end of a leather thong that are worn around your neck. The beads are copies of those reported to have been taken from the necklace from which Baden-Powell captured from Chief Dinizulu.

Three beads are worn by staffers and Scoutmasters wear four beads. A six bead necklace was worn by Lord Baden-Powell and is currently worn by the Gilwell Park Camp Chief, now known as Director of Program and Development. 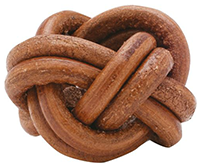 The woggle was first created in the early 1920s by Bill Shankley, a member of the Gilwell staff. He produced a two-strand Turk’s head slide which was adopted as the official woggle.

During the training phase of your Wood Badge course you will wear a woggle made from accessory cord in the color that the Scoutmaster choses. Red and green have been used on courses in recent years.

You can read more about the Woggle by downloading this flyer. 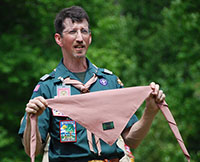 At the beginning of training you will receive a plaid scarf with the Troop 1 number and ax and log totem. All staff and participants will wear this during the training phase of Wood Badge. Upon completion of Wood Badge requirements you will be awarded the Mauve scarf and leather woggle.

The mauve scarf is a variation on the dove gray that was originally used back at the beginning of the courses. The outer light mauve is the color of humility while the inner warm red lining signifies warmth of feeling. A patch of Maclaren Tarten is on the point of the scarf

William de Bois MacLaren donated money to purchase Gilwell Park, a 55-acre estate, to serve as  a training center for Scouters and as a camp site for Scouts. He also donated money to repair the house on the property. When Maclaren died in 1921. The staff wore a plaid scarf made of the MacLaren tarten in his honor.

The axe and log totem was conceived by the first Camp Chief, Francis Gidney, in the early 1920s to distinguish Gilwell Park from the Scout Headquarters. Gidney wanted to associate Gilwell Park with the outdoors and Scoutcraft rather than the business or administrative Headquarters offices. Scouters present at the original Wood Badge courses regularly saw axe blades masked for safety by being buried in a log. Seeing this, Gidney chose the axe and log as the totem of Gilwell Park.

The Kudu horn has long been a symbol of Scouting and of Wood Badge. The horn was used to summons the very first scouts at Brownsea Island in 1907 and you will hear it on your course as you are summoned to Gilwell.

Wood Badge participants are split up into patrols just like a boy scout troop. These patrols are given the names of  the following “critters”:

Participants are assigned in this order. If a course is not full a critter is dropped starting with Antelope and then Buffalo. For this reason you will probably encounter less Buffalos and Antelopes than other critters.